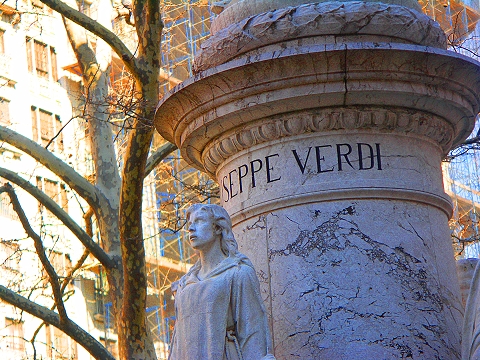 Union City, New Jersey. September 23. On Sunday, October 6 at 12:30 p.m. at Verdi Square in Manhattan, Inter-Cities Performing Arts, Inc. will celebrate the 200th anniversary of the birth of Giuseppe Verdi, the renowned Italian composer and statesman. Joining the New York/New Jersey-based arts organization and its founders, Leonard and Carmela Altamura, dignitaries from the Italian and Italian American community will participate in the brief commemoration ceremony, procession down Broadway and concert at Christ and St. Stephen’s church in Manhattan.

Following the ceremony at Verdi Square, the public will be asked to join in singing the famous “Va, pensiero” chorus from Verdi’s opera, Nabucco, accompanied by trumpeters, as members of the New Rochelle (NY) Opera and its director, Camille Coppola, the Colombians of New Jersey, Ieri Oggi Domani, Societa’ Unita, dignitaries and concert performers process down Broadway to the church.

“In recreating Verdi’s 1901 funeral procession, an event of great import in Italy, we pay homage to the composer who changed not only the direction of opera but of politics, leading to the formation of the Italian nation,” Ms. Altamura said.

The procession will enter the church to the triumphal march from Aida while students from La Scuola d’Italia Guglielmo Marconi lay wreaths honoring Verdi and opera philanthropist, Agnes Varis.

The commemorative concert, to precede the finals of the Altamura International Voice Competition, will include a brief overview by Ms. Altamura. “Like Verdi’s music, the facts of his life are dramatic.”

Ms. Altamura concluded, “With this commemoration and concert, we want to recognize Giuseppe Verdi’s remarkable contributions to opera, along with his role as a dramatist, visionary, statesman and philanthropist,” she said.